You are here: Home » THINK PINK! : PINK Softball Tournament and how it is making strides in Breast Cancer Awareness

THINK PINK! : PINK Softball Tournament and how it is making strides in Breast Cancer Awareness

Olivia Bonevento is a featured guest blogger for Komen CSNJ.  She lives at the Jersey Shore and is currently a student at a liberal arts college in Pennsylvania.  Read more about Olivia on her personal blog – oliviabonevento.wordpress.com. 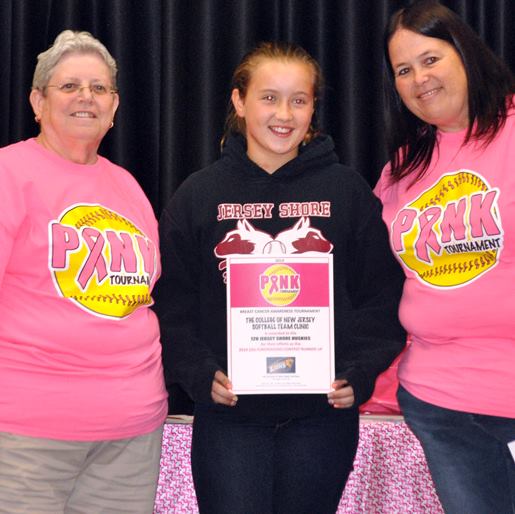 Over the years, Susan G. Komen has made a profound impact on Breast Cancer Awareness. In making that impact, they have made significant ties in the community, being part of many fundraising efforts. One of which, the PINK Softball Tournament, is especially close to the Komen Community. It is a fast-pitch softball tournament that is hosted and facilitated by not only the Pink Ribbon Softball Incorporation, but also Komen CSNJ and multiple community volunteers. The goal of the event is to engage and power local youth – the tournament urges the participants to not only fundraise for the cause, but to also assist in the spread of awareness to all they encounter, in all areas, pre and post tournament.

Tara Lavin, who founded the tournament in 2006, is truly in awe of how much the tournament has progressed over the last decade. When asked why she works so hard every year to keep the tournament up and running, she simply said, “because I can”. Tara believes it is extremely important that young women understand how to give back to the community, and that the impact they are making is instrumental in bringing awareness to Breast Cancer. Tara also emphasizes that the tournament is so special because it brings breast cancer into a more realistic light. She wants girls to realize that this “isn’t just something that you see on TV. It is a real thing that impacts real people”.  Another way that the tournament brings an awareness to Breast Cancer is during the “first-pitch ceremony”. This ceremony is where both survivors and representatives from Komen and other Breast Cancer organizations come out and say a few words. This, to Tara, is the most empowering part of the tournament.

When speaking of the first-pitch ceremony, Tara reflected back on a time where a husband and wife both attended the ceremony and the wife said a few words. The girls at the ceremony were shocked to find that it was not her that had cancer- it was her husband. “This ultimately showed the girls that men can get breast cancer too,” Tara said. “It doesn’t only impact the female population- males are just as susceptible”.  She also went on to give me some numbers. “We have about 1200-1300 players every year in the tournament, and statistics show that 1 in 8 women are impacted by Breast Cancer. In other words, out of those 1200 to 1300 players, 1 in 8 will be impacted by the disease in any way shape or form… That, for many of our players, is an extremely important realization.”

Besides the First Pitch Ceremony, there are many other aspects of the PINK Softball Tournament that make it great. Last year, the tournament raised $50,000 dollars for Breast Cancer awareness/research. These donations mostly come from the players themselves- they fundraise through bake sales, tee-shirt sales, and from their family and friends. “It really brings the community together,” Tara says, “It really shows how much we can do when we join forces”. In addition to fundraising alone, the tournament also runs a contest. Whichever team raises the most money gets a prize- younger divisions get softball clinics, older divisions receive donations for tournament recruitment.  Players get gift bags that include free softball lessons, pencils, hairbands, tee shirts to name a few.  Additionally, Dick’s Sporting Goods provides the tournament with a $10 gift certificate for every player who is in the championship game in every division. This has occurred for the last seven years. “We aspire for big things,” says Tara, “We have done extremely well in the last 10 years, but I want to do better”. And better they will do, especially with the loyal following that the tournament has. A lot of teams come back year after year, particularly those who have been personally impacted.  A story that particularly touches Tara’s heart is the story of a woman that participated in the first-pitch ceremony for about six-seven years as a breast cancer survivor and she unfortunately lost her battle to breast cancer last year… both her daughters play in the tournament and spoke on their mother’s behalf- they wanted to reach out to their peers and shed insight on the difficulties they faced. “Loyalty is what keeps the tournament going,” Tara says, “And we have had a lot of loyalty”.

The PINK Softball Tournament is yet another example of how empowering young girls can lead to social change. It doesn’t matter what you have been impacted by in life- you can join together for a cause regardless of the circumstances. Speaking for a cause, running for a cause, playing for a cause… no matter what the action, the reward of being a part of something bigger than yourself… priceless.

Learn more about the tournament – www.pinkribbonsoftball.org.