“We know that people die of breast cancer for two reasons: a lack of high-quality breast cancer care accessible to everyone, and a lack of treatments for the most aggressive and deadly forms of this disease,” said Dr. Judith A. Salerno, president and CEO of Susan G. Komen. “We are taking direct action designed to solve these problems to reduce breast cancer deaths by half in the U.S. within the next decade.” 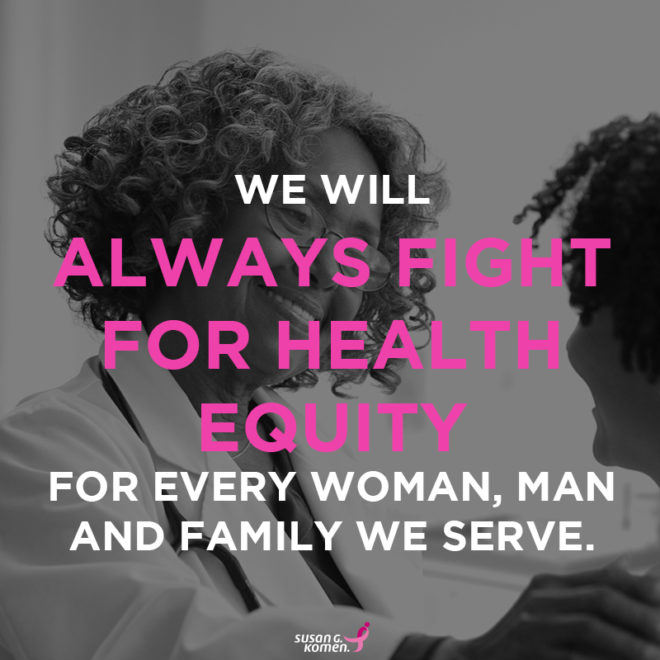 Salerno said today that a private foundation is donating $27 million for a program to significantly reduce what she called the “appalling” difference in death rates between African-American and white women in U.S. cities. African-American women are nearly 40 percent more likely to die of breast cancer than white women; in some cities, that gap is as high as 74 percent.

“This constitutes a public health crisis that must be addressed, first in the cities where these death rates are highest, and then in all areas of the country,” Salerno said.

Komen’s African-American Health Equity Initiative targets 10 metropolitan areas where mortality rates and late-stage diagnosis of African-American women are highest. The goal: to reduce the mortality gap by 25 percent within five years of beginning work in each city.

The initial areas include Memphis, Tenn., St. Louis, Mo., Dallas, Los Angeles, Atlanta, Chicago, Houston, Washington, D.C., Virginia Beach, Va., and Philadelphia. Baltimore and Detroit have been identified as high priority areas as the program expands over the next year.

The organization has invested more than $2 billion over 34 years for these programs aimed at uninsured, under-insured, and medically vulnerable populations.

To continue addressing the crisis locally and help women in its 13-county service area, Komen Central and South Jersey is hosting the Race for the Cure on Nov. 6 at Six Flags Great Adventure in Jackson. Registration is open today at komencsnj.org.

“We will never waver from our commitment to remove barriers of language, geography, economics or culture for all people facing this disease.  Every woman or man must be able to access and receive high-quality breast health and breast cancer care, be supported through their treatment and into survivorship,” Salerno said.

The second prong of Komen’s plan enhances Komen’s focus on aggressive forms of breast cancer and metastatic disease (stage IV or cancer that has spread to other parts of the body).

The new initiative aims to advance research into new treatments for aggressive and metastatic disease. Komen also will seek to leverage next-generation technology that can detect breast cancer at its very earliest stages to prevent recurrence and metastasis.

Salerno said Komen’s bold goal builds on the progress of the breast cancer movement since Komen was founded in 1982. “Death rates from breast cancer have declined by 37 percent since 1990. We have more treatments than at any time in our history. We’ve come a very long way from a time when breast cancer couldn’t be discussed publicly. Our new bold goal requires us to take a deeper dive and stretch further to ensure that every woman or man can be told, ‘There is help and hope for you.’”

Click here to learn more about the Bold Goal, Komen Central and South Jersey affiliate and the Race for the Cure on November 6.