“African-American women are almost 40 percent more likely to die of breast cancer than white women in the U.S. and in some cities, that number is as high as 74 percent. That makes this a public health crisis that must be addressed immediately,” said Komen President and CEO Dr. Judith A. Salerno. “We are deeply appreciative of friends and partners who are working with us to do so.” 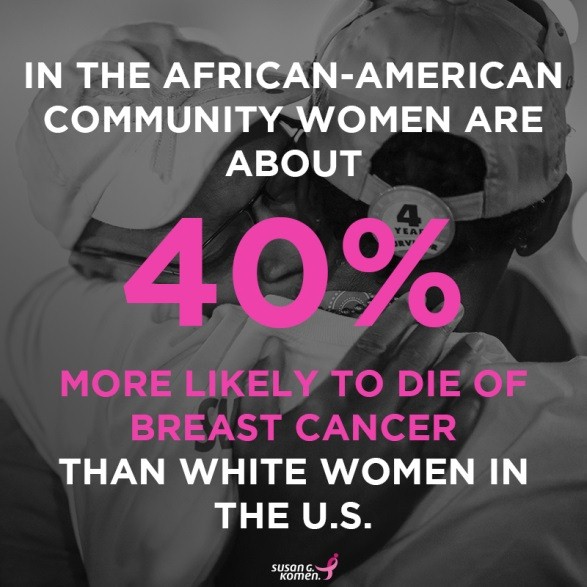 Salerno thanked the Fund II Foundation and its president Robert F. Smith for the $27 million grant that made the Komen African-American Health Equity Initiative possible. “This investment in women’s health will truly save lives,” Salerno said.

Smith said at the event today that the breast cancer initiative ties strongly to Fund II’s priorities. “The Reverend Dr. Martin Luther King said that the biggest injustice one can find is really in health care,” he said. “The Fund II Foundation is focused on – among a number of pillars – helping to decrease that disparity and level the playing field in health care and treatment for African-American women.”

Komen’s African-American Health Equity Initiative initially targets 10 U.S. cities where mortality rates and late-stage diagnosis of African-American women are highest. The goal: to reduce the mortality gap by 25 percent within five years of beginning work in each city. The Initiative will expand across the country.

Joining Smith and Salerno were Jeri Lacks Whye, patient advocate and granddaughter of Henrietta Lacks, an African-American woman whose cancer cells were taken without her permission before her death in 1951 and used for research for decades, and Dr. Freda Lewis-Hall, chief medical officer and executive vice president of Pfizer.

The panel today reflected Komen’s collaborative approach to the Health Equity Initiative, an approach Whye called critical. “Community engagement is the foundation that allows you to speak with people suffering from breast cancer disparities,” she said. “It starts a conversation that can lead to real results.”

Lewis-Hall stressed the importance of African-American participation in clinical trials. “Why do more of us need to get involved in clinical trials of potential new breast cancer treatments? Because we have so many great scientific opportunities right now and so many questions. These questions will only be answered for us, by us,” she said.

The initial targeted cities are Memphis, Tenn., St. Louis, Mo., Dallas, Los Angeles, Virginia Beach, Va., Atlanta, Chicago, Houston, Washington, D.C. and Philadelphia. Baltimore and Detroit have been identified as high-priority areas as the program expands over the next year.

The organization has invested more than $2 billion over 34 years for these programs aimed at uninsured, underinsured, and medically vulnerable populations.

“We will never waver from our commitment to remove barriers of language, geography, economics or culture for all people facing this disease. Every woman or man must be able to access and receive high-quality breast health and breast cancer care, and be supported through their treatment and into survivorship,” Salerno said.

About Susan G. Komen®
Susan G. Komen is the world’s largest breast cancer organization, funding more breast cancer research than any other nonprofit outside of the federal government while providing real-time help to those facing the disease. Since its founding in 1982, Komen has funded more than $920 million in research and provided more than $2 billion in funding to screening, education, treatment and psychosocial support programs serving millions of people in more than 30 countries worldwide. Komen was founded by Nancy G. Brinker, who promised her sister, Susan G. Komen, that she would end the disease that claimed Suzy’s life. Visit komen.org or call 1-877 GO KOMEN. Connect with us on social at ww5.komen.org/social.

About Fund II Foundation
Fund II Foundation makes grants to 501(c)(3) public charities in five areas: 1) preservation of the African-American experience, 2) safeguarding human dignity by giving a voice to the voiceless and promoting human rights 3) improving environmental conservation and providing outdoor education that enables people of all ages and backgrounds to enjoy the numerous benefits of the great outdoors 4) facilitating music education, particularly in primary and secondary schools, to nourish both the mind and the soul 5) and sustaining the uniquely American values of entrepreneurship, empowerment, innovation and security. For more information on Fund II Foundation, visit www.fund2foundation.org.