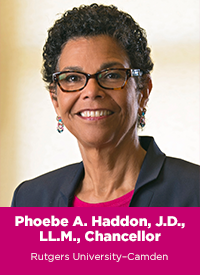 Phoebe A. Haddon is chancellor of Rutgers University–Camden, where she has direct responsibility for a campus that enrolls nearly 7,000 students in 39 undergraduate programs and 28 master’s and doctoral programs. Haddon previously served as dean of the University of Maryland Francis King Carey School of Law. In 2011, the school received a $30 million commitment from the W.P. Carey Foundation. Recognized by the Society of American Law Teachers in 2011 with its Great Teacher Award, she was a law professor for more than 30 years, at Temple University and Maryland, before coming to Rutgers. She has written extensively on equality and access in education issues as well as on matters related to access to counsel for civil litigants. Haddon is a member of the American Bar Association’s Commission on the Future of Legal Services. She is on the Boards of Trustees for the Cooper University Health System and the Philadelphia Museum of Art; is a member of the CEO Council for Growth; and serves as a Class C Director for the Federal Reserve Bank of Philadelphia, where she is designated as that board’s deputy chair for 2018. Haddon consistently is named by the National Jurist as one of the “25 Most Influential People in Legal Education.”