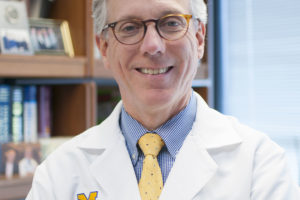 Over the last two decades, Dr. Hayes’ professional training and career have been directed toward bridging the gap between laboratory and clinical research.  He received a bachelor’s degree (1974) in biology and a master’s degree (1977) in biochemistry and an M.D. (1979) at Indiana University.  He completed his residency in internal medicine at the University of Texas Health Science Center at Dallas, Texas (Parkland Memorial and affiliated hospitals) and a fellowship in medical oncology from 1982–1985 at Harvard’s Dana Farber Cancer Institute in Boston, He then joined the faculty at DFCI and served as the Medical Director of the Breast Evaluation Center from 1992-1996, when he moved to Georgetown University where he led the breast cancer group until 2001.  From then until 2017, he was the co-Director of the Breast Oncology Program at the University of Michigan Comprehensive Cancer Center.

Dr. Hayes’ research has focused on translational breast cancer research, in particular directed towards investigations of tumor biomarkers in the germline, cancer tissue, and circulation.  He co-chaired the Consortium on Breast Cancer Pharmacogenomics (COBRA) to study inherited germline mutations that might guide anti-estrogen therapies, and he has led studies in the cooperative groups to determine if various biomarkers in breast cancer tissue, such as HER2 and the 21-gene Recurrence Score (OncotypeDx) can be used to direct the use of adjuvant chemotherapy.  Dr. Hayes published the initial studies of the circulating MUC-1 antigen (known as the CA15-3 assay), now widely used to monitor patients with metastatic breast cancer, and he has also led  ground-breaking pre-clinical and clinical trials of circulating tumor cells (CTC). in metastatic breast cancer.

Dr. Hayes has also published extensively regarding establishment of guidelines for the use of tumor biomarker tests in clinical practice, and he was a member, and has served as chair, of several tumor biomarker guidelines panels convened by the American Society of Clinical Oncology (ASCO) and the College of American Pathologists (CAP).  He is widely considered to be an expert in the field of clinical research of breast cancer, especially with new hormonal and chemotherapeutic treatments.  He lectures and publishes extensively regarding the management of patients with breast cancer.  In 2007, his accomplishments in translational research and mentoring were highlighted when he was named recipient of the inaugural Gianni Bonnadonna Breast Cancer Award by the American Society of Clinical Oncology (ASCO).

Dr. Hayes is a past Chair of the Solid Tumor Correlative Sciences Committee of the Cancer and Leukemia Group B (CALGB), the Breast Cancer Translational Medicine Committee of the Southwest Oncology Group (SWOG), and the Correlative Sciences Committee of the North American Breast Cancer Intergroup. He co-chairs the Trans-Ox Committee, which oversees translational studies in the Early Breast Cancer Trialists’ Collaborative Group of Oxford. Dr. Hayes served on the ASCO Board of Directors and from 2015–2018 he was President of ASCO.  He is a Komen Scholar, and he is or has been on several editorial boards of leading cancer journals.  He has published more than 200 peer-reviewed papers, 150 book chapters, reviews, and editorials, and he has edited or co-edited five textbooks on general oncology, breast cancer and tumor markers.